A century ago, several German thinkers defined it broadly, a geopolitical entity that stretched across much of the continent. Or, some joke that simply put, "Mitteleuropa is wherever you find strudel." 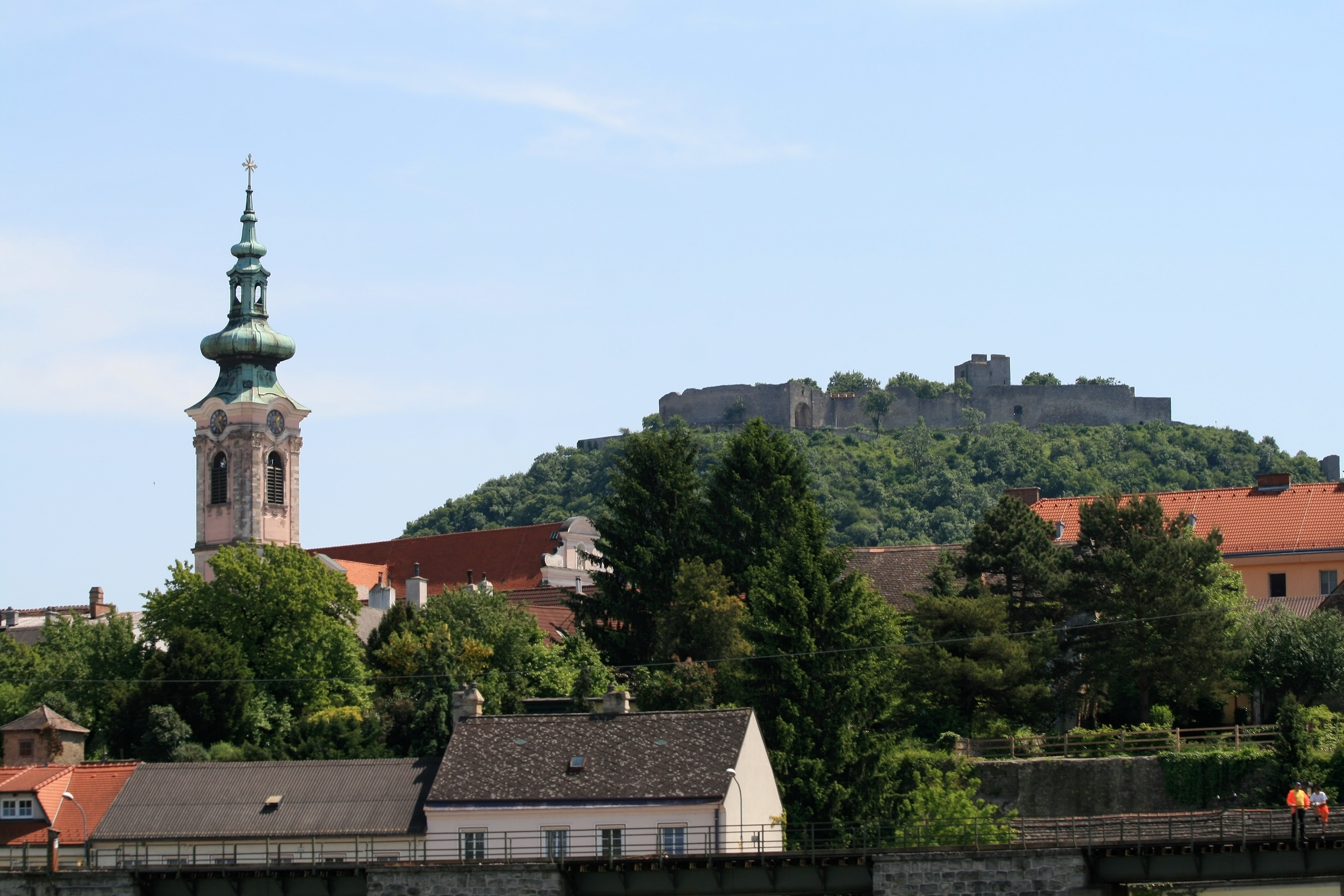 HAINBURG, Austria – Lounging by the pool in this medieval Austrian town, overlooked by 17th century castle ruins on a hilltop nearby, you can enjoy a schnitzel, a schnappsor an eiskaffee mit schlag. But listen closely, and virtually all you hear on the blankets of fellow sun-bathers is the Slovak language. (Indeed, a sign jammed in the grass helpfully reminds guests, in both German and Slovak, to please urinate in the WC, not on the lawn.)

After all, the Hainburg schwimm-ing pool is just a stone’s throw from the Slovak border.

The pattern repeats throughout our corner of Central Europe. Lake Balaton – the beloved “Hungarian Sea” – sees a sizable sprinkle of Austrian, Slovak, Czech and German license plates. The Hungarian thermal baths in Mosonmagyarovar, along Slovakia’s border, lure loads of Slovaks and Austrians. The nearest Alpine ski slopes in Austria, in Semmering, are a favorite among Czechs, Slovaks and Hungarians.

Ninety years after World War I broke up the old Habsburg Empire, and two decades after the collapse of Cold War divisions of the continent between “East” and “West,” there are subtle signs that the old notion of “Mitteleuropa” – the common culture of Middle Europe – is gradually re-emerging. Some dispute if that is actually reviving regional identity, as my colleague Colin Woodard explored last year for the Christian Science Monitor.

Yet from my vantage point in the Slovak capital, Bratislava – at the confluence of Slovakia, Hungary, Austria and Czech Republic – Mitteleuropa is more than a nostalgic state of mind. I lived for six years in Hungary during the 1990s, now the past four in Slovakia with my Hungarian wife and kids; our daughter was born last year in Austria, at the Hainburg hospital; and for the past three years, I’ve regularly taught journalism in the Czech cities of Prague and Brno. In other words, I’m lucky enough to claim a relationship with all four countries.

And now, after nine long decades, the region is once again borderless. As a result, it’s not just that these four nations increasingly swim, ski and shvitzside-by-side, or that you'll find similar foods, music and architecture. There’s also commerce and employment. Slovaks, for example, flock to the outlet mall in Parndorf, Austria, and to supermarkets in Hungary. When we visit a doctor, restaurant or car-parts store in northeastern Austria, I always drop a few words of Slovak or Hungarian, to flush out who among the nurses, waiters or shop assistants is from across the border.

Then there’s the remarkable housing boom: with Slovakia’s impressive economic growth driving property prices upward in the capital, scores of Slovaks – historically derided as poor peasants – are buying up homes in remote Hungarian and Austrian border villages. They breathe new life into aging communities, and turning them into de facto suburbs of Bratislava.

A century ago, several German thinkers defined “Mitteleuropa” broadly, a geographic and political entity that stretched across much of the continent: west from today’s Switzerland, to Ukraine in the east, north from the Baltics, to Croatia in the south. Others suggest it traces the boundaries of the Habsburg Monarchy. Or, some joke that simply put, “Mitteleuropa is wherever you find strudel.”

A Hungarian journalist friend of mine, Gabor Miklos, last week described to me how the 2007 book he edited, “Imperial and Royal Adventures: On the trail of the Habsburg Empire in the 21st Century,” took him from Tyrol to Trieste, from Chernivtsi in western Ukraine to Banat in Romania. Throughout his travels, he tracked the same trio of familiar architectural-cultural sites that linked them all: railway stations, theaters and coffeehouses.

Each was a vital contributor to the “cultural community” that bound together a vast, multi-ethnic empire, and “was as strong a unifying force as the Habsburg military or bureaucracy,” says Miklos, who has long reported for the leading Hungarian daily, Nepszabadsag.

Meanwhile, he says, the greatest engine of “Mitteleuropa” were the Jews. They relished a “Golden Age” during the late 19th century and early 20th century, as they were granted citizenship, allowed upwardly mobility, and weren’t obliged to assimilate.

“The Jews of Central Europe were just one nation among many,” says Miklos. Amid the rumbling of nationalist aspirations, “they were the only ones who wanted to keep the idea alive.”

Mitteleuropa was effectively snuffed out in 1918, with the end of World War I. The Austro-Hungarian Monarchy splintered into new nation-states like Austria, Hungary and Czechoslovakia, with bits later becoming part of Italy, Poland, Yugoslavia and Soviet Ukraine.

Then came the Holocaust.

“That Jewish middle class that had produced, consumed and disseminated the cultural community of Mitteleuropa died out,” says Miklos.

During the Cold War, the Communist regimes encircled their states with barbed wire, watchtowers and machine guns. “Central Europe” faded, with Vienna now in “the West,” and her neighbors in “the East.” Czechs, Poles and Hungarians, though, often translated each other’s films, which kept the embers burning for certain segments of society.

When the Iron Curtain finally parted in 1989, one great revelation was the newfound freedom of movement. If only to visit old neighbors. Borders still existed, though, with visas often required. Still, most people focused instead on surviving a turbulent transition.

What really accelerated regional integration was joining the “Schengen” borderless zone on Dec. 21, 2007, which removed passport controls entirely. Most of the checkpoints still stand today, like ghost towns, as motorists slow down to roll past the empty booths.

I’m not the only one who marvels at how dramatically things have changed.

Martin Sloboda, who runs a tourism company in Bratislava for German- and English-speakers, could be described as Slovak, but he’s really a goulash of ancient Bratislava cultures: Hungarian, German, Slovak.

“My mother tongue may be Slovak, but one-two generations back, we were speaking Hungarian and German at home,” says Sloboda. His own grandfather was interned after World War II, for nearly two years, precisely for speaking those two languages.

Today, Sloboda delights in having a foot in each culture, sharing that with his young daughter and son. Just last week, he says, in one three-day span they bicycled in southern Slovakia, along the Hungarian border; went cycling around Neusiedler Sea in Austria; then soaked in the thermal baths of Mosonmagyarovar.

Three days, three countries, three cultures. Or, is it really one?

“I felt at home in all three,” says Sloboda, 36. “Once you cross the border into Hungary, Czech Republic or Austria, there are so many things in common that if it weren’t for speaking different languages, we would be practically the same. There are things inside of us that we don’t realize are there. You can’t erase 500 years of history. You can’t change people just because you change the border. People remain the same.”

That said, Gabor Miklos points out that today, when Czechs and Hungarians meet each other, German is no longer the common language. It’s English. After a schnitzel lunch, he reminds me that while much of the Habsburg-era architecture remains, these societies are now influenced by “tabloid culture” imported primarily from the United States and Britain. As for Vienna, he says, it’s evolved from a “real cultural capital” in the world, to merely a “very important touristic center, where nostalgia for this period is commercialized and sold.”

In fact, Miklos needles me for having an overly nostalgic, “American tourist” view of Mitteleuropa. But at least I’m not alone.

Englishman David Keys first arrived in Bratislava in 1995, harboring only a vague notion he was moving to “post-Communist Eastern Europe.” Then the nuances emerged.

“Whenever anyone here today says ‘Central Europe,’ they’re defining themselves against the Eastern Europeans: as something respectable, with things done nicely, compared with the primitive, uncultured ones down the road, who do things barbarically,” says Keys, who teaches history at the British International School in Bratislava and has contributed chapters about the region to two history textbooks.

The term “Mitteleuropa,” though, is one that should be brandished judiciously.

“I’ve actually used that phrase, to look like I’m really clever, but it immediately puts me into that pretentious 1 percent of society.” Even his own wife “gives me one of those looks,” he says with a laugh.

Nevertheless, after a few Pilsners in a new Czech restaurant, Keys agrees with me: there’s something to this revival.

“It is a romantic idea, but the romanticism exists if some people believe it,” he says. “If you come here looking for Mitteleuropa, you can certainly find it.”

-isms
Against The Totalitarian Language of History

Literature
Review: Outside the Lines, by Ameera Patel
Tweets by @themantle